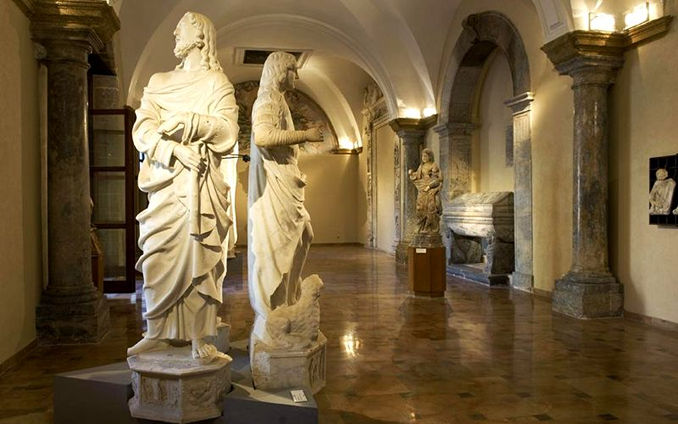 The Pepoli Museum was named after Count Agostino Pepoli, who in 1907 assigned much of his rich heritage to the establishment of a Civic Museum, which became non-profit organization in 1909 and National Museum in 1925 due to the importance and richness of its collections, becoming one of the most important museums in Sicily. It became a Regional Museum with its passing into the hands of the Regional authority for cultural heritage.

The Museum Pepoli is situated in the ancient Carmelite monastery adjacent to the Shrine of the Annunciation. In fact, jewellery and votive offerings, which were donated by the nobles and princes visiting the Madonna, as well as simple objects of little value given by devout citizens are gathered in the Pepoli Museum and constitute a heritage of inestimable value.

On the ground floor of the Pepoli Museum there is the Renaissance sculpture section with the statue of S. Giacomo Maggiore (St James the Greater). Also on display are many historical relics, as well as a guillotine used in Trapani in the Bourbon period. Climbing the stairs of the Museum Pepoli, you reach the first floor where the archaeological section, the Art Gallery and industrial arts section are situated. There are large rooms, with collections of paintings dating from between the thirteenth and fifteenth century by Italian and Flemish painters, and several heterogeneous works of decorative and industrial art. Not to be missed are the many artefacts in coral, ancient testimony of the city's coral workers and numerous nativity figures made from wood, canvas and glue. In addition, in the Pepoli Museum there are two cribs in alabaster and marine materials.

Of particular value is room 22 of the Pepoli Museum where, as we said before, there is a collection of the extraordinary treasure of the Madonna of Trapani, which is a heterogeneous collection of jewellery offered in the past to the Madonna. In the same room, three precious liturgical objects are exhibited. These do not belong to the treasury of the Virgin, but come from the Church of the Jesuit College of Trapani. These objects are the chalice, ciborium and monstrance.