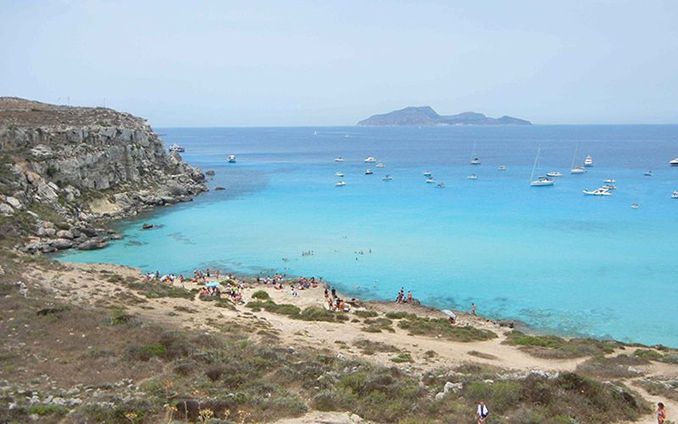 The island of Favignana is the largest of the Egadi islands and its length extends to 19 km2. Its name comes from the term Favonio, which is a warm wind that blows from the west.

Formerly, the main source of subsistence income of the inhabitants of Favignana was fishing, especially tuna, which was fished using the traditional "mattanza" method, a very cruel kind of fishing, that has no longer been practiced since 2007.

Today the wealth of Favignana is represented by tourism, thanks to its natural beauty as the coast and beaches can accommodate a large number of visitors and allows the island of Favignana to base almost all of its own economy of this industry.
In fact, the crystal blue sea of Favignana and the fact that you can easily access the coast by boat make the island the perfect place for bathing.

Favignana is not only important for its sea, as the inland area offers interesting cultural and historical attractions to discover such as, for example the Tuff quarries. These quarries are, for the most part, abandoned but still remain fascinating to explore due to the unnatural landscapes carved out by the Tuff extraction of the past.
Some of these quarries have tourist facilities where you can stay overnight.

Another place of historical interest in Favignana is the castle of Santa Caterina, which stands as the headland.

As for the events not to be forgotten is the summer carnival, which is the summer version of the carnival in February, and the Trofeo Ignazio Florio Favignana, where every year in September, there is a picturesque sailing competition