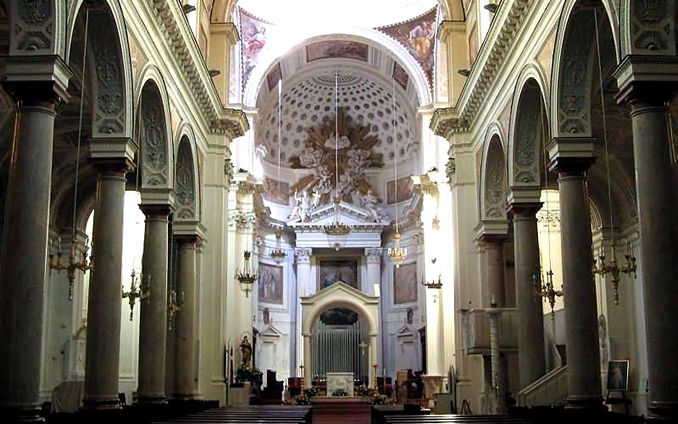 Since 1884, the Cathedral of St. Lorenzo, the seat of the bishop of the diocese of Trapani, together with the Annunziata sanctuary has been the main place of worship of the city and also the main location for the most important religious ceremonies taking place in the city, such as the Bishop's pontifical Masses on the patronal feast days of St. Alberto and the Madonna of Trapani. In fact, within the Cathedral there is a chapel, in which a copy of a marble statue of the Madonna of Trapani is kept, which is brought out every year on August 16th and carried in a procession from the Cathedral itself, around the streets of the city.

The Cathedral is dedicated to St. Lorenzo Martyr and here, on August 10th, special celebrations take place when, on the nearby beach of Porta Botteghelle, a suggestive moment of prayer is held for the souls of deceased seamen.

The cathedral was built in 1421 and elevated to the status of parish church in the second half of the fifteenth century. Over the centuries there were several renovations which altered its structural appearance, until the eighteenth century, when there was a major restoration, which gave the cathedral its current appearance. In addition, over the centuries, the cathedral has been enhanced with significant paintings and decorations, which by leading artists from Trapani.

Following the liturgical reform desired by the Vatican Council II, the structure of the altar of the Cathedral was significantly modified, in fact, work on the renovation of the altar, the tabernacle, the ambo, the candlestick, the baptismal font and lectern was completed in 1997 on the wishes of Bishop Dominic Amoroso indicating the magisterial and pastoral power of the bishop

As for the entrance of the Cathedral on June 29 1990 a large bronze gate was inaugurated, replacing the wooden which had been worn out by time.