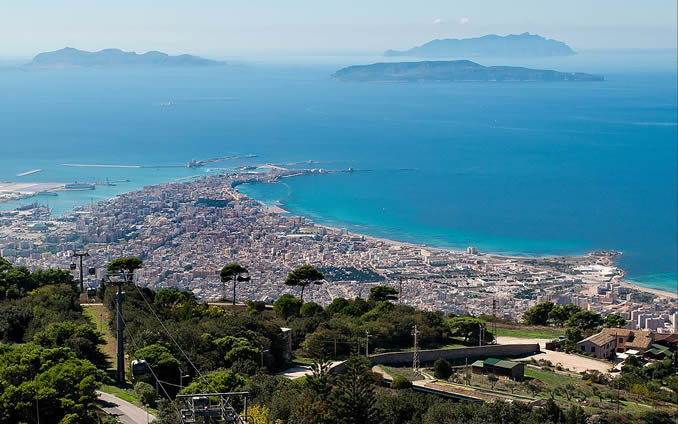 The city of Trapani is the capital of the province and is known as the city of Salt and Sail, a name given to it by a few years after the successful experience of Acts 8 & 9 of the America's Cup in 2005, where Trapani established itself internationally.

The Municipal territory is inhabited by little more than 70000 people spread over a vast area of 271 square kilometres.

The ancient name of Trapani is Drepanum, which in Latin means "Sickle". According to Greek mythology, a sickle fell from the hands of Ceres, and was transformed into a curved strip of land on which the city rose, hence the name Drepanum. Staying on the subject of mythology, this territory is also mentioned in Virgil's Aeneid, in which Anchises, Aeneas's father died in Drepanum.

As regards the history of Trapani, the city was under the influence of Carthage in the ninth and eighth centuries BC, becoming one of the last strongholds of the Carthaginians in Sicily. The Carthaginian rule ended in 241 BC when during the famous battle of the Egadi the Carthaginian fleet was destroyed by the Romans and then the Romans conquered the city.

After the Romans, Trapani was conquered by the Vandals, Byzantines, Normans, and after a short period of Angevin rule, in 1282 the city passed into the hands of the Aragonese. In the sixteenth century the city came under Spanish rule, and its location in the Mediterranean was so convenient, especially for trade that the city had the nickname of "The Keys of the Kingdom".

The climate of Trapani has very rigid winters and hot summers, although thanks to the wind it is not a torrid heat and this makes it, one of the sought-after tourist destinations. The tourist industry, has in recent years has reached its peak, thanks to political policy that has focused heavily on the regeneration of the city's natural and cultural resources. Furthermore, the efficient development of the "Vincenzo Florio" airport, and the presence of numerous cruise ships, has allowed Trapani to exponentially increase the number of tourists visiting the city.