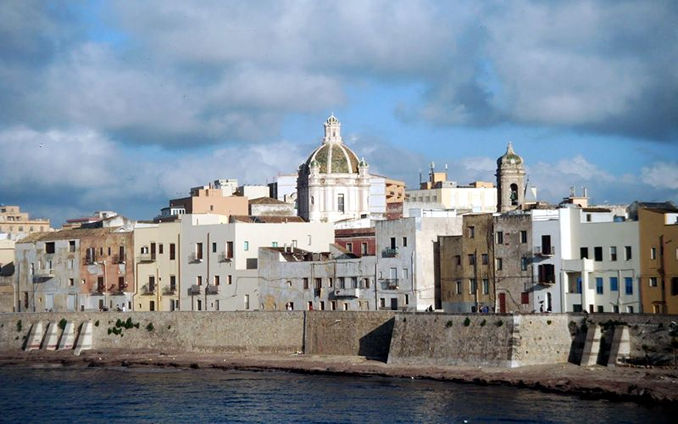 In recent years, the historic centre of Trapani has been highly upgraded and reassessed in particular as far as tourism is concerned, and it has not surprisingly has been called the "good drawing room of the city." Indeed, walking around the historic centre is like walking inside the heart and mind of the city, especially since many elderly people live in these streets, and tell stories about the past life of the city. Also you can see buildings and churches, which have been restored and brought to their former glory. Worth visiting, in the heart of the historic centre of Trapani, is the Palazzo della Giudecca or Ciambra, an ancient building in the Jewish quarter, built in the sixteenth century by the Ciambra family and the church of S. Augustine, built in the fourteenth century and badly damaged during the bombing of World War II.

Today the Church of St. Augustine is used as the diocesan museum of the city.

Continuing our journey between the walls of memory of the old town we can visit the ancient church of St Giacomo Maggiore, which in 1830 became home to the Fardelliana Library on the wishes of Giovan Battista Fardella.

The Fardelliano library is one of the most popular cultural centres in Sicily due to its rich heritage of ancient manuscripts and correspondences relating to the activity of the ancient headquarters of the Senate of Trapani. Not to be forgotten is the good collection of works from the XVI, XVII and XVIII centuries, along with 119000 volumes from the 1800s and 1900s.

Going back up through the centre, we find the charming Via Garibaldi, which was renovated in 1996 with the restoration of the paving. In this street, once called Rua Nova, you can see many historical buildings, former residences of the nobility of the city, such as Palazzo Milo, now housing the Superintendence of Cultural Heritage, Palazzo Mokarta Fardella and Palazzo Riccio di Morana, now the headquarters of the Presidency of the Regional Province of Trapani.

Leaving the Rua Nova behind, you can find Palazzo D'Ali, which until 2008 was the site of the City Council of Trapani, today the council meets in Palazzo Cavarretta, the former seat of the Senate of Trapani, in Via Torrearsa, opposite the central Corso Vittorio Emanuele.