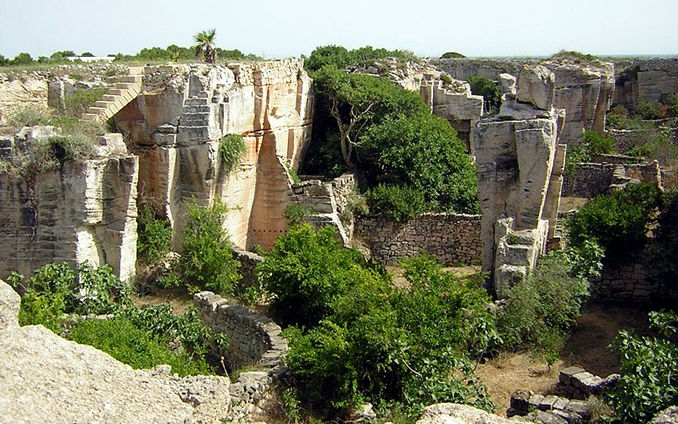 One of the raw materials found in abundance on the island of Favignana was Tuff, a building material which was extracted from the island for decades. In fact there are many quarries, because over the years the mining activity was very intense, providing a source of income for the islanders, who were not only fishermen but also skilled miners.

The tuff quarries could be of two types: they were either open to the sky or made by digging tunnels, caves and grottos to reach the material deeper inside, which was the most valuable due to its or compactness and grain.
For more than 50 years, generations of miners worked and suffered in the tuff quarries of Favignana carrying the material on their shoulders to wagons and boats which then transported it to Trapani and the other Egadi islands.

The instruments used for the extraction of tuff from the quarries were the "mannara", which served to trace the block of tuff, and then there were the "zappune" and the "piccune", which helped to extract of the block.
It was not until 1949 for the first electric machine to cut the tuff was used.

The name tuff is a misnomer, because this material is technically called Calcarenite. Over the years, the extraction of tuff from the quarries was never very profitable, because the tuff suffered from crises due to changing market conditions.
Favignana Tuff became almost obsolete, unable to cope with the new construction market and uncompetitive if compared to the material extracted from the tuff pits of Marsala. Almost all the tuff quarries of Favignana ceased to operate.

To date only one tuff quarry remains operational, employing just a handful of workers.

The old clay pits have become a popular tourist attraction due to their unusual and evocative square-shaped formations.
In some tuff quarries it is possible to find tourist accommodation