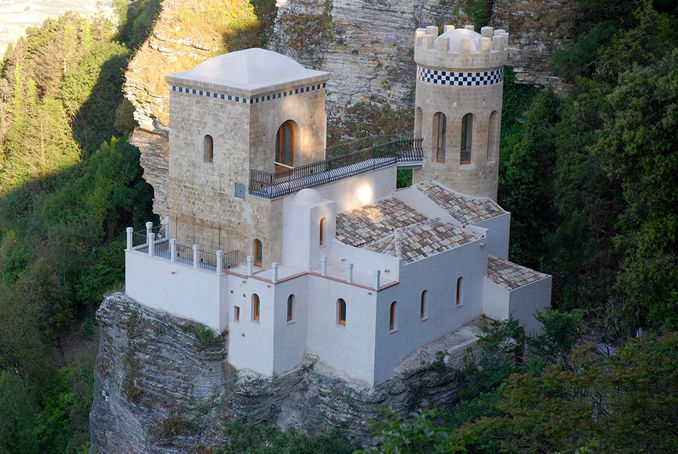 The Pepoli Tower was built by Conte Agostino Pepoli (from whom it takes its name) from a project developed by himself.
Situated on a rocky platform, practically under the Balio towers, that he himself took the effort to restore, the Pepoli Tower represented his dream, which over the years became one of the monuments of the town of Erice.

After lengthy negotiations with the descendants of Conte Pepoli, the Pepoli Tower is now owned by the city of Erice, which intends to recover the building after years of decay and neglect.

Under the rocky cliff top of the Pepoli Tower a pine forest was planted by the same Conte Pepoli where he used to stop to breathe in some fresh air.
He also loved to walk along the avenues of pine trees with the most important members of the nobility of Trapani. The Pepoli Tower, in addition to hosting Nunzio Nasi, Minister of the Kingdom of Italy, also hosted scholars, scientists and other artists here, invited by the count to lodge in the tranquillity of the mountain.

In 2010 the work was contracted for the recovery of Pepoli Tower of Erice with the aim of it becoming the seat of the Observatory for Peace in the Mediterranean, the idea of which was taken up by the mayor of Assisi, who signed memorandum of intent with the town of Erice. The renovation works finished in 2014.

The observatory at the Pepoli Tower of Erice will deal with all matters concerning human rights and international cooperation activities and will also be used for meetings between different cultures and religions of the Mediterranean.
In Pepoli Tower provision has been made a recording cabin with an efficient internet system to allow not only heads of state and government, but also young people and visitors passing through, to state their commitments and plans of action to promote peace in the Mediterranean.