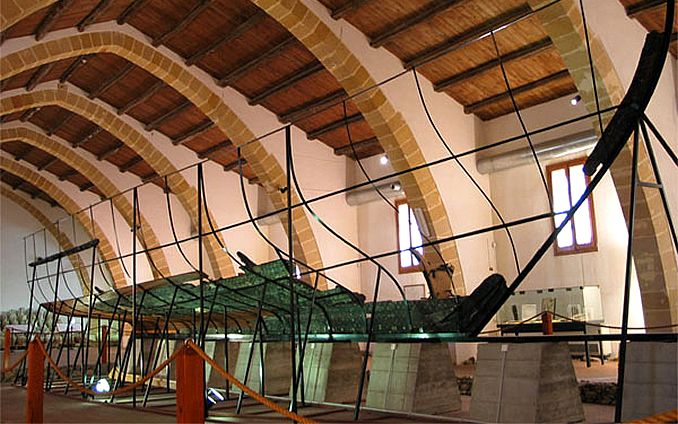 The Baglio Anselmi Archaeological Museum is located on the Capo Boeo waterfront on the ancient archaeological site of Lilybeo. This museum is famous because it houses the remains of a Punic ship and tells the story of Lilybeo, the ancient name of the city of Marsala, from prehistory to the Middle Ages.

This museum was founded not only to preserve and exhibit the wreck of the Punic ship, which was found in 1971 in the sea surrounding Isola Lunga, but since 1986 it has also exhibited all the material from archaeological excavations conducted in the area.

The exhibition is divided into four rooms, the first of which sets out precisely the wreck of the Punic ship, the second containing museum panels teaching the history of the city of Lilybeo, the third room contains finds from Mozia, the archaeological area of Lilybaeum and from Mazara del Vallo and finally the fourth room contains simple Latin inscriptions.

The museum is set up at Baglio Anselmi, a building founded in the late nineteenth century as a winery for the production of the "Marsala" fortified wine. Inside the museum there is a large courtyard and exhibition spaces have been arranged in two large warehouses where the barrels were stored.

During the restoration of the courtyard, the remains of an excavation were found, including a tomb, a furnace and various masonry structures, demonstrating the presence of man since the fourth century BC.

Recently, in the locality of Marausa Lido another Punic wreck was found which is better preserved and more complete than the Punic wreck currently present within the museum.
Currently undergoing restoration, this new Punic wreck may be placed next to the Punic ship already present at the museum in Marsala.

The entire facility is accessible to visitors with disabilities.