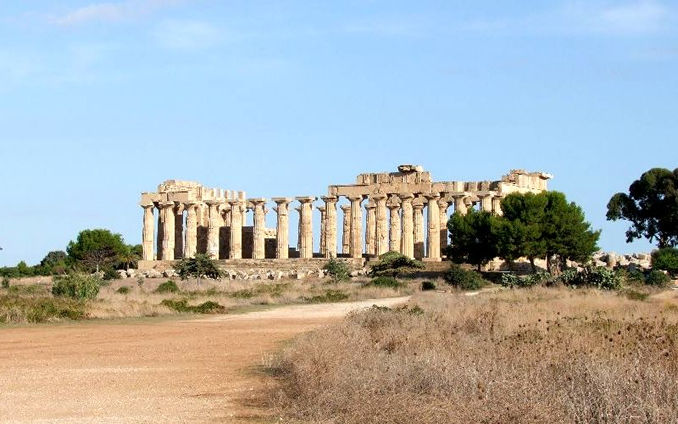 In the park of Selinunte there are several temples and they are marked with the letters of the alphabet. We'll start with Temple A, which was built between 490 and 460 BC, during the aristocratic phase of the government of the city, to celebrate the gods which were important to the aristocracy, probably Poseidon or Dioscuri. In the late Punic period the temple was re-used as a place of worship.

Temple B of Selinunte is a small building with four front columns with Ionic columns and is located near Temple C. It is a typical example of a mixture of different styles that were in vogue in Punic times. They did not have strict rules in architecture, so they were free to indulge themselves.

Temple C of Selinunte was built around 560 BC and is located in the most prominent part of the acropolis and was dedicated to Apollo. It has six columns on the short sides and seventeen on the long sides. The temple had a political-administrative function and was home to important city archives
Temple D was built around 560 BC and is dedicated to the goddess Athena. It is located north of Temple C in an area of Selinunte occupied by the remains of buildings and altars.

Temple E is the first temple to appear to those visiting the park and dates back to the fifth century BC. It was completely rebuilt in 1957 and was accessed from the eastern side of Selinunte through some steps that led to the colonnade. The temple is dedicated to the goddess Hera.

Temple F was built in the mid-sixth century BC It was completely destroyed and many historians attribute the temple to Athena, the goddess of war.

Temple G is the largest of those in the park of Selinunte and is among the largest in the Greek world. In fact it was 113.34 metres long by 54.05 metres. It was built around 530 BC, but was never completed due to the destruction of the city of Selinunte. It was probably dedicated to Apollo or Zeus, and according to a document which has come to light, it seems probable that the temple was a place for the safe storage of valuables in the city.

Temple M was probably built during the tyrannical period of Selinunte. It is not known with certainty to which divinity it was dedicated, but remains today completely destroyed. It is destruction was caused by an earthquake in the fourth century BC.

Temple N was built in the first quarter of the sixth century BC. This building was also destroyed by the earthquake that struck Selinunte the fourth century BC and, from the findings that were made during the excavations conducted between 1982 and 1985, it can be deduced that the temple was dedicated to the goddess Hera.

Temple O was built around 480-470 BC and according to many scholars it is thought that it was dedicated to Castor and Pollux who were, according to Greek mythology, the brothers who asked Jupiter for the gift of immortality. The temple is identical to Temple A precisely because it was dedicated the two brothers, who always lived in peace and in harmony, sharing the same things.