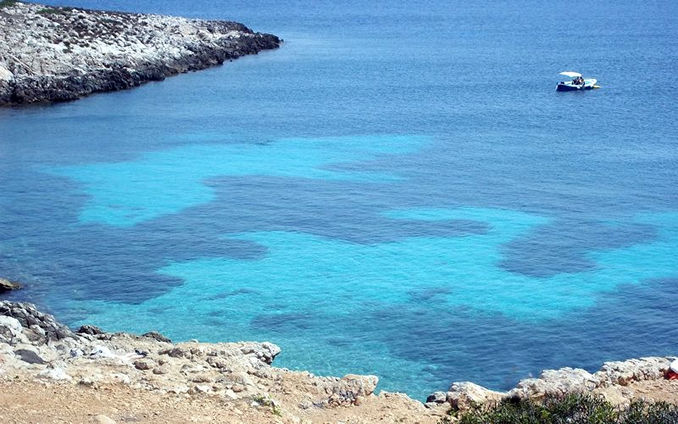 Cala Minnola represents another destination worth visiting for all those wishing to enjoy the island of Levanzo, both in terms of bathing, and from the underwater archaeology point of view.

Indeed, like Cala Fredda, the depths of Cala Minnola holds numerous archaeological finds among which, the remains of a fish processing plant, dating back to the Roman period must be mentioned.
In addition to these findings, Cala Minnola is particularly rich in archaeological artefacts, because as chronicles of the time tell, this area was the scene of a very bloody naval battle on the 10th of March 241 BC, in which the Roman fleet launched an attack on the Carthaginian fleet which sank, carrying with it some extraordinary treasures down to the Cala Minnola seabed.
The outcome of this battle paved the way for the Roman rule.

In the vicinity of Cala Minnola, numerous artefacts, such as amphorae used to transport wine, pottery shards, and the wreck of a ship have been found.
To prevent this underwater heritage from being defrauded by collectors or tourists looking for souvenirs, since July 2006 the area has had a remote control system consisting of four underwater cameras. Captured images are viewed by staff of the Authority for Cultural Heritage, which is housed in the tonnara (ex-tuna fish plant) on Favignana.
The video control system of the wreck and other relics preserved in the depths of Cala Minnola also offers tourists the chance to see the finds whilst sitting comfortably in front of a screen.

The beach of Cala Minnola, which is located on the south side of the island, has no real coastline, but there is an equipped jetty which is used for fishing boats.

Behind Cala Minnola is a pine forest with picnic areas equipped with benches and tables, to allow tourists to spend a little time in the shade.